On Tuesday, September 29, Hot Shop Heroes: Healing with Fire instructor, Patricia Davidson, and program participant, Army Sergeant First Class (SFC) Peter Bazo from Joint Base Lewis-McChord (JBLM), joined forces to install the new exhibition, Healing in Flames, which is currently on display in the Grand Hall at Museum of Glass. All of the pieces were designed and crafted by soldiers participating in the Hot Shop Heroes program. 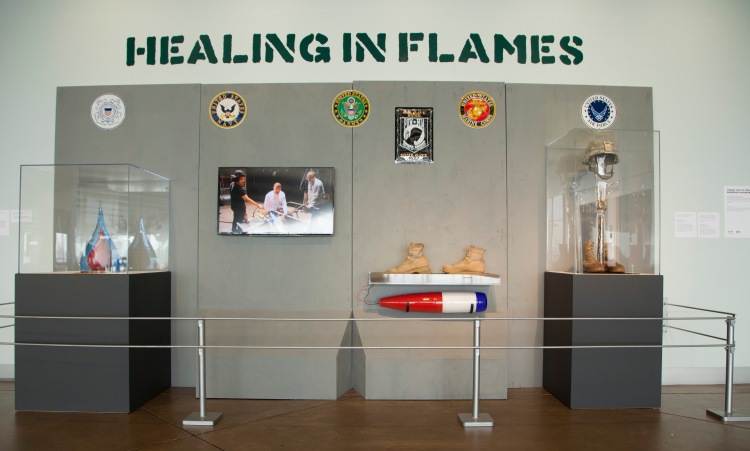 One of the class’ collaborative pieces included in the exhibition, entitled Mortal Combat, features a glass scorpion and camel spider preparing to fight in the desert sand. The piece was inspired by a game often played by deployed soldiers as a way to pass time. The game involves placing a scorpion and a camel spider in a pit—dug by soldiers—where they would engage in a fight to the death.

While installing Mortal Combat, SFC Bazo realized something was not quite right with the desert sand. He explained that there is a common misconception about the cleanliness of the desert. Contrary to popular belief, the desert is not a clean place, explained SFC Bazo. In fact, it is just the opposite.

The soldiers were quite pleased with the accuracy achieved by the exhibition installation crew at Museum of Glass in creating a representation of the T Wall, a large concrete wall reinforced with rebar used for blast protection purposes in war zones. This T Wall replica displays some of the exhibition’s works of art.

Healing in Flames is on display at Museum of Glass through March 2016.

Derek Klein is a documentary film maker and has been covering the Pacific Northwest and international glass scenes with Museum of Glass for the past seven years.

Do you wanna build a snowman? 🎵❄️⛄️
Marshmallow clouds being friendly ❄️💙
As we at Museum of Glass celebrate our 20th Anniversary, we are focused on the future of the Museum and its role in the Pacific Northwest and the glass world. The generosity of donors like you allows us to provide unique and transformative experiences for our visitors and to have a sustained, positive impact on our community.
Looking for the perfect activity to end your holiday weekend? Sign up for a slumping workshop at the Museum of Glass Education Studio!